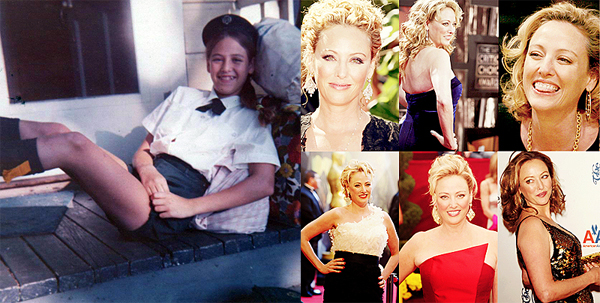 Virginia Gayle Madsen was born in north of Chicago, Illinois, the daughter of Elaine (née Melson), an Emmy-winning poet, producer and playwright who often works for PBS, and Calvin Madsen, a fireman. Her mother left a career in corporate business to pursue a writing career. Her brother is actor Michael Madsen. Her paternal grandparents were Danish and her mother has Irish and distant Native American ancestry. Virginia is a graduate of New Trier High School in Winnetka, Illinois.

As a child, she adored watching old black & white and silent films. “I am a huge Bette Davis and Joan Blondell fan”, she states.  In her formative years, she was very artistic. She never ran around with the popular crowd.

Her first effort as an actor was as her brother’s assistant in magic shows the two would concoct for their family. She later attended the Ted Liss Acting Studio in Chicago and Harand Camp Adult Theater Seminar in Elkhart Lake, Wisconsin. Of her experience with Liss, she said: “I had wanted to join his class since I was 12. It was well worth the wait because I don’t think I could have got that sort of training anywhere else especially in the United States…I always wanted to make a real career out of acting.”Virginia turned to her high school drama department as an outlet to express herself.  “I used it as a way to transform myself into something more”, she recalls and that she did. This rich cultural environment challenged me, my personality and the image I had of myself and gave me strength of character, the self-proclaimed former hippy chick.

It wasn’t long before Virginia’s drive and focus transformed her from a shy teenager into a fledgling stage actress. It was destiny for Virginia to become a star as her determination and talent quickly paid off. When a Polaroid landed on the desk of the famed director David Lynch, he immediately cast her in his film Dune.  Immediately following, Virginia landed a role in the first computer film called “Electric Dreams” in 1984.

Virginia became popular with audiences in 1986 with her portrayal of a Catholic schoolgirl who fell in love with a boy from a prison camp in Duncan Gibbons’s Fire with Fire. As beauty queen Dixie Lee Boxx, she was the sexy love interest of minor-league baseball manager Cecil “Stud” Cantrell (William Petersen) in the made-for-cable Long Gone (1987). She played a secretary in the 1988 comedy Hot to Trot and appeared as Maddie Hayes’ cousin in the final season of Moonlighting. She also starred in the 1992 horror film Candyman. During the filming of Candyman, Madsen was hypnotised so that her pupils would remain dilated in certain scenes. The director Bernard Rose wanted the character not to have a typical screaming style when confronted by the villain.

When Virginia became pregnant with her son, Jack, she put her successful career on hold. It wasn’t until Jack was in pre-school that the actress had notions of reentering into her Hollywood career. Upon hearing of Virginia’s desire to act again, Francis Ford Coppola asked her to audition for his latest project, the film version of John Grisham’s legal thriller, The rainmaker, a role that reestablished Virginia’s dynamic career, The Hot Spot directed by Dennis Hopper, HBO’s first feature Long Gone and David Lynch’s Dune. Her versatility was seen in the independent film Almost Salinas opposite John Mahoney and in American Gun, opposite Academy Award winner James Coburn.

From there, her career began to soar again. And with the critical acclaim she received for her portrayal of “Maya” in Sideways and her roles in Firewall, A Prairie Home Companion, The Astronaut Farmer, The Ripple Effect and The Number 23, it is clear that her hiatus to raise a family did nothing to hinder this go-getter from resilient success. Virginia comes from a very talented family.  In addition to her Emmy award winning mother, Elaine Madsen, her brother is the gifted actor, Michael Madsen. Virginia lives in Los Angeles with her teenage son.

It keeps growing with starring roles opposite Harrison Ford in the action thriller Firewall, with Meryl Streep and Kevin Kline in the comedic drama A Prairie Home Companion, and Forest Whitaker in the existential drama The Ripple Effect.  She also starred opposite Jim Carrey in New Line’s 2007 psychological thriller The Number 23 directed by Joel Schumacher, as well as opposite Billy Bob Thornton in the 2006 comedy The Astronaut Farmer.  In 2008, she starred in the Sundance hit Diminished Capacity alongside Matthew Broderick and Alan Alda for IFC. She voiced Queen Hippolyte, mother of Wonder Woman, in the 2009 animated Wonder Woman film.

Also on Virginia’s slate is her production company with partner Karly Meola called Title IX Productions.  Their first project is the documentary I Kknow a Woman Like That which previewed at the Phoenix Film Festival in April 2009 and premiered at the Chicago Film Festival in October 2009.  The doc was directed by Virginia’s mother, Elaine Madsen, about the lives of extraordinary women ages 64-94.  Next in the company’s lineup is the documentary Fighting Gravity about women ski jumpers’ ongoing battle for the right to compete in the 2010 Winter Olympics.  Title IX will team up with Empire 8 Productions and Vancouver-based Screen Siren on the project.  The duo also has several projects in development that they’re shopping around for financing including screenwriters Sebastian Gutierrez’s screen adaptation of Martha O’Connor’s novel The Bitch Posse and a remake of the 1984 film Electric Dreams in which Virginia appeared.

Virginia Madsen can next be seen The Magic of Belle Isle and Long Time Gone, both slated for release later this year. Last year, Madsen starred in Red Riding Hood and the independent film The Art of Love. She also starred in the comedy-drama series Scoundrels, based on the New Zealand series Outrageous Fortune. She was previously on USA’s final season of Monk, alongside Tony Shalhoub, also starred opposite Kevin Spacey in the indie comedy Father of Invention directed by Trent Cooperand Lions Gate thriller A Haunting in Connecticut released in march 2009.

In 2010, she landed the starring role of Cheryl West in the ABC drama series Scoundrels. In December 2010, it was announced that she will be joining the cast in the NBC science fiction/action series The Event.[13] In 2012, she joined the cast of the AMC western drama series Hell on Wheelsas Mrs. Hannah Durant, first appearing in episode eight of season 2, “The Lord’s Day”. In 2013, Madsen began appearing on Lifetime’s Witches of East End as Penelope Gardiner, the main villainess of the first season.

With the reestablishment of her thriving acting career, Virginia finds herself facing the ultimate challenge&with a huge smile. Juggling her successful career, caring for her #1 priority, son Jack, plus finding time to maintain her sanity is nothing short of a miracle. However, Virginia relishes her life and seeks taking on more. Even with her hectic lifestyle, she still manages to find time for weight training, spinning classes and pilates.