“I Know A Woman Like That” Screening – October 25th!

•• In honor of A New Beautiful campaign on this Awareness Month: Jeanie Madsen’s Gallery presents documentary “I Know A Woman Like That” screening – October 25th with Virginia Madsen and her mother Elaine Madsen. See graphic below for full details of the event! 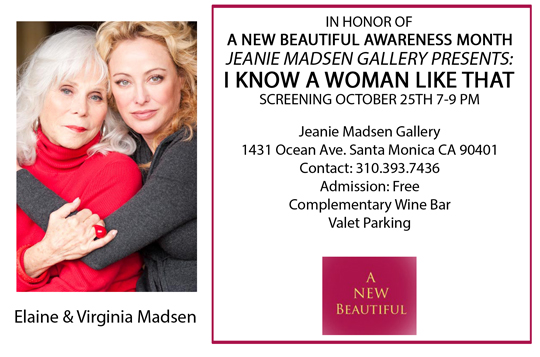 Virginia Madsen joins cast of “The Wilderness Of James”

•• New movie project for Virginia Madsen has been confirmed! She has joined the cast in “The Wilderness Of James”, an indie film coming of age tale that was scripted by Michael James Johnson, who will make his directorial debut and who also wrote the script. Already announced cast are Isabelle Fuhrman, Kodi Smit-McPhee, Evan Ross and Tabor Helton. The film takes place in Portland and is the coming of age story about a young boy dealing with absence of his father. Virginia Madsen will play the role of Abigail Charm. Super Crispy is producing the low-budget indie and shooting is scheduled to begin next month. Nicholas Frenkel and Glenn Howarton are exec producing.