Virginia Madsen stars in the heartwarming story “The Magic of Belle Isle” as the recently-divorced mother of three girls who befriends the writer who moves in next door (Morgan Freeman).  I spoke to her about making the movie, which is available now On Demand and will be in theaters July 6th.

•• What was it like for you working with three young actresses who played your daughters?  How do you develop a level of trust with them?
– Well, I raised a child. I had a boy child who’s now 17 and I’ve worked with kids before. I know that this was a big job. We had a lot to do, they had a lot of dialogue and I really, really wanted them to trust me. One of the greatest things is that they all had nice parents. We struck gold with that. They were nice kids, they weren’t Hollywood-ized and the mothers really allowed me to mother their children which was incredibly trusting and generous. Slowly, I gained their trust and they could see how I wanted to be with their daughters, and that I was going to take good care of them. Before the movie started, I asked the art director and [director] Rob [Reiner] if I could have a space on the set, a room that I could set up arts and crafts.  Because that’s what I did with my son, and decided to bring music, and all the supplies.  I said, “Just give me this room, but no one is allowed to go in it but us, that is the O’Neil house, and I don’t want a sound cart in there, I don’t want lights being stored, no makeup touches go on in this room, this is the O’Neil house and this is our sacred space.”  And they loved it. And then the art department said, “Actually, there’s a sun room, we’ll make it a part of the movie.” And so when there was a break, this allowed me to keep us al together as a family and allowed them to remain focused and quiet when it wasn’t alright for them to play in the yard especially if it was raining. The next great thing was, they bonded as sisters.  Madeline Carroll [who plays the oldest daughter] is really something special, and she helped shepherd the girls, she really loved those girls. She would sit and make necklaces with them. She was never bored or impatient like a lot of teenagers naturally would be. END_OF_DOCUMENT_TOKEN_TO_BE_REPLACED

Comments are off
Published on In
News

•• More pictures of Virginia Madsen attending BMW Party and a Q&A Session at Aruba International Film Festival have been uploaded at the photo gallery.

Comments are off
Published on In
News

•• The 3rd edition of Aruba International Film Festival opening night welcomes Oscar and Golden Globe nominated actress Virginia Madsen, festival Co-founder and Exe­cutive Producer Jonathan Vieira welcomes her on the Red Carpet at Paseo Herencia in Palm Beach for the World Premiere of “The Magic of Belle Isle” co-starring Morgan Freeman. She was in attendance (with actor Nick Holmes) for a Meet & Greet cocktail party wearing  a beautiful cyan dress.

For more information and updates, visit the AIFF website: http://www.arubainternationalfilmfestival.com or their Facebook page for the latest news updates.

Comments are off
Published on In
Career Media News

•• The Movie Geeks speak with actress Virginia Madsen about her new film The Magic of Belle Isle, which is directed by Rob Reiner (Misery, The Bucket List) and stars Morgan Freeman.  You can listen the interview below.

Comments are off
Published on In
Career Events News

“The Magic of Belle Isle” LA Premiere is tonight! 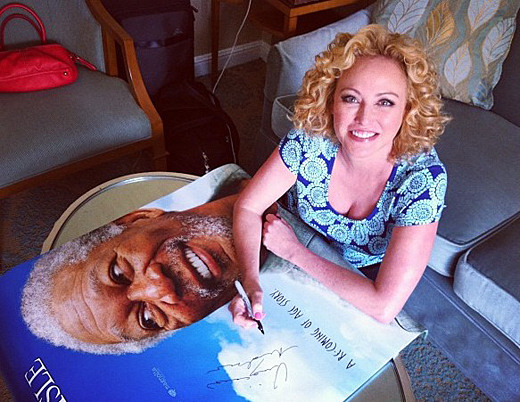 •• The Magic of Belle Isle’s Los Angeles red carpet premiere is tonight. The film is now available to rent on iTunes, on demand and in theaters on July 6th.