Oscar-nominated actress receives career achievement award, participates in Conversation With series and has new movie showing Three decades after visiting Bradenton to film one of her first movies, Virginia Madsen returns to the area in celebration of a career that’s since earned her Oscar and Golden Globe nominations. 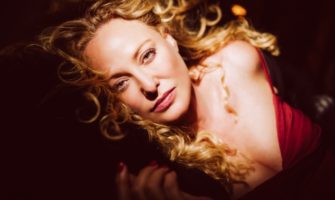 The “Sideways” actress will receive a career achievement award at Sarasota Film Festival and participate in the festival’s In Conversation With series Saturday. She also co-stars in the centerpiece film “1985,” about a gay man struggling to come out to his parents (Madsen and Golden Globe-winning “The Shield” star Michael Chiklis) during the early years of the AIDS crisis.

In a phone interview with the Herald-Tribune, Madsen said part of what attracted her to the film was her familiarity with the era the film depicts. “I was a very young person during that time when nobody knew what AIDS was,” Madsen said. “Now I knew more about it because I was an actress and I’d already had a couple of friends die. But people outside of my community, it was just talked about in hushed tones and they still called it ‘gay cancer.’”

At the same time, she felt the movie had a relevancy to today’s world despite its period setting. “This story is not just about 1985,” Madsen said. “This story is still going on now because there’s still young people who can’t come out to their family, there’s still families who don’t want to talk about their identity of their kids.”

Though the film remains hard to track down even in the digital age, it’s developed a following as a baseball movie classic with Madsen a fan of the film, too. “I just had one of the best times I’ve ever had making a movie on ‘Long Gone,’” Madsen said. “I loved being in Florida … It was just me and a bunch of baseball players and a girlfriend, it was great. What’s not to love?”

Madsen’s acting career started just a few years before making “Long Gone.” Her first major role was as Princess Irulan in 1984′s “Dune,” David Lynch’s adaptation of the Frank Herbert sci-fi novel, which “Blade Runner 2049” director Denis Villeneuve plans to remake. (“I know, and I need to be in it!” Madsen laughed.)

“Dune” was an ideal first experience on a big film, Madsen said. She got to work with Lynch, who she called a lovely man who let the actress watch him in the editing room, and a star-studded cast. “It was very, very exciting because I got to watch all these extraordinary actors,” Madsen said. “I had a heartbreaking crush on Patrick Stewart, Sting was running around in a loincloth and Kyle MacLachlan was going through the book with me to help me understand the world I was in.”

She had a similar experience acting in 2006′s “A Prairie Home Companion.” She got to appear in a cast with actors she idolized such as Meryl Streep and Lily Tomlin, and work on the final film of iconic director Robert Altman, who came to Sarasota Film Festival to screen it shortly before his death.

Madsen played an angel who appears periodically throughout the film. Since Altman didn’t know when he’d want Madsen’s character to appear, he had her sit next to him and backup director Paul Thomas Anderson, recently Oscar-nominated for “Phantom Thread.” “So I got to sit next to him and Paul Thomas Anderson sometimes all day and just watch them work and listen to how he directed,” Madsen said. “Every once in a while, he’d say ‘Put in the angel!’ and I’d go in and he’d go, ‘No, no, bring her out.’”

She appeared in “A Prairie Home Companion” after what remains her definitive role in Alexander Payne’s Oscar-winning 2004 film “Sideways” as Maya, a waitress who connects with protagonist Miles (Paul Giamatti) over their shared love of wine as they each recover from failed marriages.

Madsen knew the film would be critically acclaimed because of Payne and Giamatti’s involvement, but wasn’t sure how she would be received. The role ended up earning her Oscar and Golden Globe nominations and revitalizing her career. And when Madsen talks to aspiring actors now, she tells them to prepare for the possibility of that kind of role in their careers.

“It was the movie that changed everything for me,” Madsen said. “It’s kind of an once-in-a-lifetime job. I suppose I was an underdog going all the way to the Oscars, but that’s a great place to be because I was really representing actors that work all their lives and struggle job to job to job, you don’t feel like you have a name. And it can happen — that kind of success can happen seemingly right out of the blue.”

This entry was posted by Lau on Thursday, April 19th, 2018 at 5:04 pm. It is filed under Career, News. You can follow any responses to this entry through the Comments Feed.