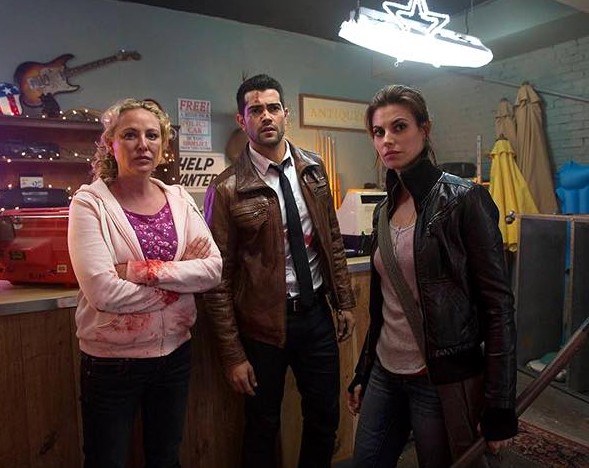 •• Following its release on Crackle’s streaming service back in March, live action video game adaptation Dead Rising: Watchtower is heading to VOD in International markets this July. Check out the trailer below:

Dead Rising: Watchtower follows Chase Carter (Jesse Metcalfe), a reporter trying to make it big – but the pursuit of his career-defining story leads him into the heart of a zombie-infested warzone. East Mission, Oregon is locked down after police find the bodies of what appear to be victims of a zombie attack. Zombies are not a new phenomenon, but outbreaks are uncommon. Past incidents were only just contained in time and the country is nervous. When two ambitious Net 2.0 reporters, Chase and his colleague Jordan, get inside the quarantine zone to report on a large group of civilians trapped in an inner city dome stadium, they realise they’re waiting for a rescue that isn’t coming. Many of those abandoned inside are survivors of past outbreaks who carry the zombie virus in their blood. They only survive by taking the antidote once every 24 hours — a drug called Zombrex. When the local drug supply mysteriously fails, a small crisis explodes into mass panic and catastrophe.

The story unfolds from two perspectives: survivors inside the city and officials and the media on the outside. Unlike virtually all other zombie narratives, the world hasn’t ended. The outbreak is a large-scale natural disaster that the rest of the world watches on TV. After Jordan manages to escape the quarantine zone, she sets out to unravel the conspiracy behind the failed Zombrex, while Chase is trapped inside with a few others like tough loner with a secret Crystal (Meghan Ory) and grief-stricken mother Maggie (Virginia Madsen), battling to survive. Their perilous, action-packed journey to escape simultaneously forces them to question what they’re willing to do to survive and, ultimately, their own sense of humanity.

Dead Rising: Watchtower will be available for download on July 1st and is directed by Zach Lipovsky (Leprechaun: Origins) and written by Tim Carter (Mortal Kombat: Legacy), with a cast that includes Jesse Metcalfe (John Tucker Must Die), Meghan Ory (Once Upon a Time), Virginia Madsen (Candyman), Dennis Haysbert (24) and Rob Riggle (22 Jump Street).