•• Lifetime is going two for two with its freshman scripted series. As expected, the cable network has given a second season pickup to drama Witches Of East End, starring Julia Ormond, Mädchen Amick, Jenna Dewan Tatum and Rachel Boston as a family of witches living in the secluded seaside town of East Haven. 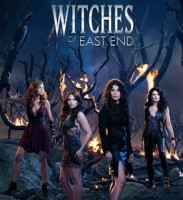 The series has received a 13-episode order for a 2014 premiere. “With its great story telling and amazing cast, Witches Of East End is leading a full-blown witch renaissance,” said Rob Sharenow, EVP and General Manager of Lifetime. Witches Of East End joins Lifetime’s freshman Devious Maids, which also has been renewed for a second season.

Based on Melissa de la Cruz’s best-selling novel, Witches Of East End centers on the mysterious Beauchamp family: free-spirited artist Joanna (Ormond) and her two grown daughters, wild-child bartender Freya (Dewan Tatum) and shy librarian Ingrid (Boston), both of whom are unaware that they are gifted (and cursed) with a magical birthright.

The series’ first season will conclude on Sunday, December 15th, at 10:00pm ET/PT.

This entry was posted by Lau on Friday, November 22nd, 2013 at 5:41 pm. It is filed under Career, News. You can follow any responses to this entry through the Comments Feed.